When the Doves Disappeared by Sofi Oksanen 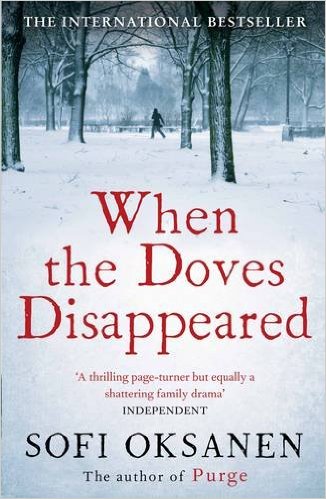 and 1963 to 1965.  Before WWII Estonia was an independent  country, which then became occupied by the Soviets and the story starts in the thick of a (1941) battle with Estonians fighting the Red Army, just before liberation (as they thought) by the Germans.

We follow the, very different,  lives of Juudit and her husband Edgar, and how their lives intertwine with Edgar’s cousin Roland.  The story moves, clearly,  between the 1940s and the 1960s, as Edgar changes sides from the Germans to the Soviets as the power shifts, and thereby follow the course of the occupation during the Word World by Germany and then the Communist control in Estonia during the 1960s.  Meanwhile Edgar’s cousin Roland is leading a very different life, coping with tragedy and the silence that surrounds it, and hunting for the cause in the 1940s.  In the 1960s he is working with the underground in Tallinn – totally opposite to Edgar’s life, who is attempting to rewrite (literally) events that may not show him in a good light to the Russians.

Through the telling of this interesting, and often exciting, story, we see the celebrations that follow the liberation by the Germans in the 1940s, and the gradual realisation that this does not mean the ending of the war.    Repression moves from the Soviets to the Germans and back again to the Soviets and we see the fear that so many people lived in, as they tried to survive these terrifying years by conforming to the regime of the time, and then being terrified that the current regime will hear of your actions under the previous regime.  And then of course there are the people who will give anything to escape out of the country.

Through the very different courses of the main protagonists lives we see how it is to live in Tallinn and the countryside during these times, and how a struggle to survive and do the right thing can lead to danger and great personal risk.  This is truly a story of heroism, love, betrayal and great sadness.

For the tourist this is a fascinating history of lives in turbulent times in Estonia.   It provides excellent background history for anyone visiting Tallinn, and though has little in the way of descriptions of places and buildings, it has plenty of atmosphere and vivid imagery of what it would have been like to live through those times.

There is a useful glossary at the end of the book – worth glancing through before starting the book.

Though a very  interesting book from a historical viewpoint, for me the characters lacked depth, and so I did not find the book a terribly gripping read.  However I am very pleased that I read it as I had no idea of what took place in Estonia during these terrible times, and this book will add depth to any visit to Tallinn that would otherwise have been missing.