The Pearl of York, Treason and Plot by Tony Morgan

(I earn commission if you purchase using these Amazon links)

Guy Fawkes is being interrogated after his failed attempt to blow up Parliament.  To take his mind off his predicament he thinks back to his childhood, and so provides us with a fascinating insight into life at the end of the 1500s. 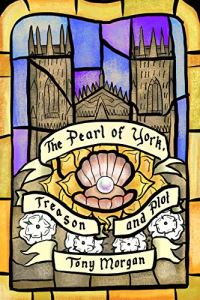 Set in, and around, York this novel is written from the point of view of Guy Fawkes and spans the years 1586 to 1605.  It tells of his family, his schooling, his hopes and aspirations, as well as being a wonderful overview of life in York at that time.  When Fawkes was in his teens Catholics were being persecuted and mass immigration was causing concern.  Integrated with Fawkes’ tale of his teenage years onwards, the reader also meets Margaret Clitherow, sometimes known as the Pearl of York, who was later canonised.

Just my sort of book!  Historical fiction that gives insights into the life and times that Guy Fawkes grew up in, including legal practices of the time illustrated by the trial of Margaret Clitherow, all written in a very readable style.  At the end of the book is an “Author’s Note” explaining which parts of the story are fact and which are fiction.    5*s from me.

Also by this author: