The Things You Didn’t See by Ruth Dugdall

Great plot, with lots of twists

20 years ago, as a child,  Holly witnesses a shooting.  Now the past cannot be avoided, as Holly becomes involved in another shooting, and this time she can’t run away. 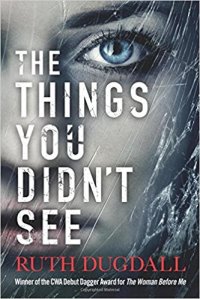 Set in Suffolk, in the UK, Holly is training to be a paramedic. She is called to attend an attempted suicide at the farm where her brother shot someone 20 years before.   Is it a suicide attempt, or a murder – and can Holly’s synaesthesia help her uncover the truth?

Plenty of twists in this psychological thriller, and a great plot.  Enough characters to weave a great story, but not so many as to cause confusion.  However the writing style wasn’t for me; I found it a little slow, though the last few chapters were exciting, fast moving and definitely 5* rating.  The story is original, and interesting – some of it a little unbelievable.

This is the first book I have read by this author.  On the strength of the plot and the final few chapters I will read another, but 3*s for this book as some of it seemed too wordy, and the use of character’s thoughts to remind the reader what had gone before I found unnecessary.