A Justifiable Madness by AB Morgan

Mark is at a train station, and behaving very oddly.  He is taken to a psychiatric unit – just as he hoped he would be.  He is obviously acting, but why does he want to be admitted to a hospital? 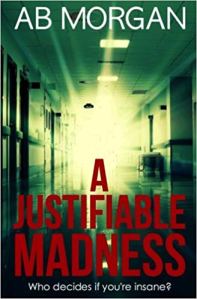 Told from the perspective of Mark and Nurse Monica Morris this is a thought provoking, very involving story.  Why did Mark want to get into a psychiatric unit?  How will the doctors treat him once he is there.  How is he going to get himself out again?  Although containing some very witty moments, this is a strong psychological thriller.  As the book cover says “Who decides if you’re insane?”

5*s from me for this “just one more chapter before I stop reading” novel, with a plot that seems scarily plausible (indeed it was inspired by real events of the 1970s), and made me pause for thought on many occasions.  Very few main characters, with plenty of action that keeps going at a good pace.  Lots of “what will happen next” suspense for the reader, and writer by an author who (I understand) was previously a mental health nurse.

This is the second thriller I have read by this great author, the first being The Camera Lies; also rated 5*s by me.